I was fascinated by the sheer range of different practitioners shown in this week’s case studies, and also found something to relate to with each one. Here are the quotes that really resonated with me:

This has been one of the most fascinating case studies so far for me, as I love Pentagram and was aware of Scher’s work without even realising it was her.

Scher describes typography as “painting with words”, and as the central part of my role is typesetting, I find this enlightening. Most of my day is spent trying to convey different feelings and nuances within a children’s book, which adds an extra layer of complexity, but is essential to draw in the reader and help them engage with the content.

Scher wanted to create an identity for the Public Theatre NY that was populish, New Yorkish, and loud and proud. She used the historical American wooden type that portrayed the sense of power whilst using lots of different weights to give designers lots of scope with the identity. She said that “typography gives an impression before you read the content, and adds weight to the meaning”. For the Highline logo, she shifted the line elements of the letter H to look more like a railway track than an H, saying that “it is the act of weaving little bits of information to make a bigger thing”. 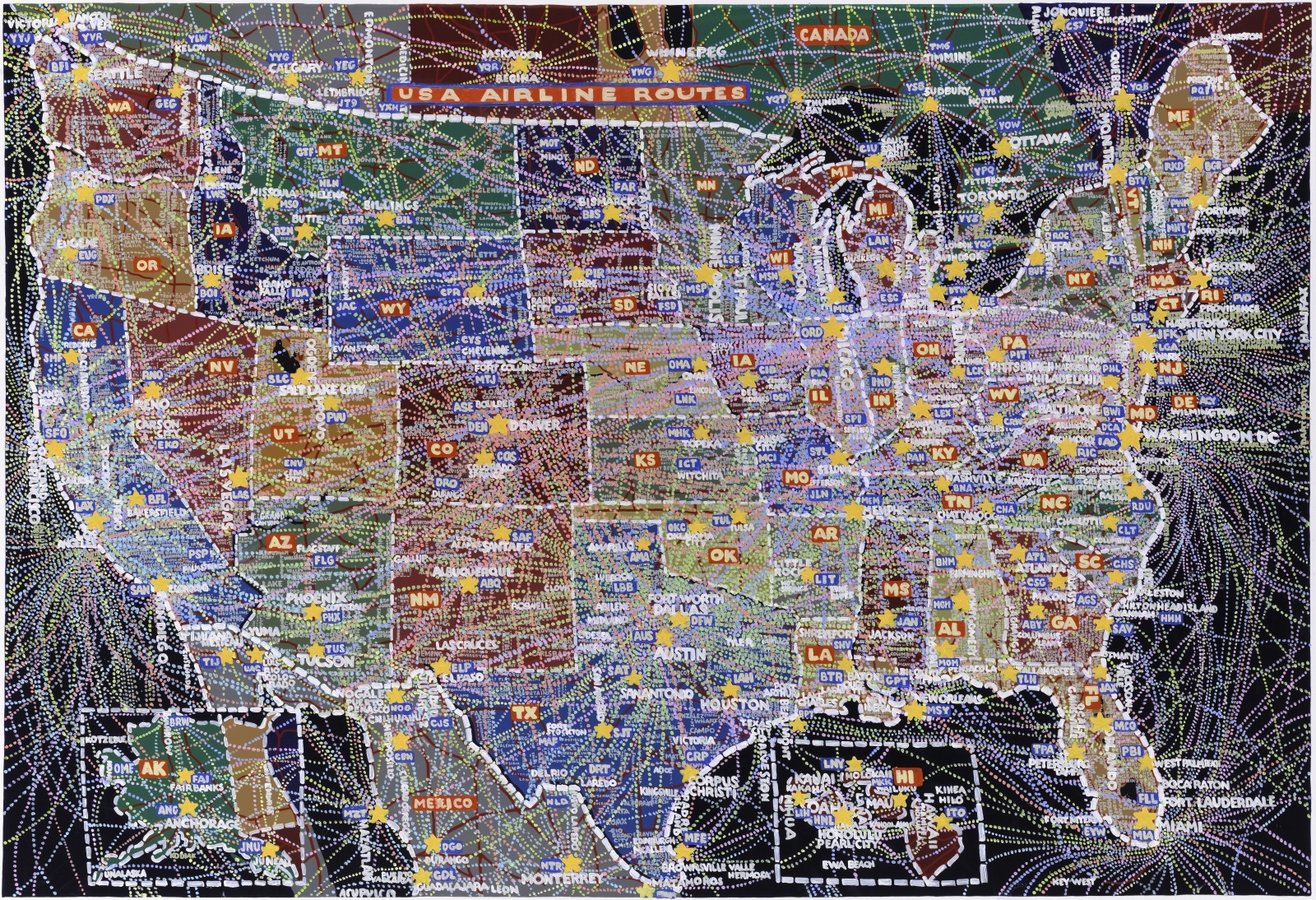 Most impressive to me are the maps that she created to display different pieces of information about the United States and its population. This map shows the regional airline routes in the continental US. Scher used to paint fonts by hand, cut things up and ripped, glued art supplies, however in the late 1990s, when type became most digitised, it felt like a physical loss to her so she started to create the maps as a way to reconnect. She feels that the maps are emotional, not fictional, and enjoys that although the information she displays is easy to understand in itself, the sheer volume means that you have to sit down and study the work.

Studio Culture: The Secret Life of the Graphic Design Studio – Shaughnessy and Brook

Shaughnessy set up Intro in the late 1980s and burnt out after fifteen years. Maybe from this, or during, he learnt that “laughter is the real secret behind the secret life of the studio”.

Designers rarely work in a physical or social vacuum, so it is essential that we consider how the collaborative studio can work best. Shaughnessy says that it is a combination of three things:

and together, they can produce a “fizzy cocktail of real estate, psychology and creativity.” Studios aren’t homogenous but they are a commonality that “they are ongoing transactions between the needs of the individual and the collective needs of the group”, which he admits is easier said than done. The digital world has replaced drawing boards with computer desks, which are smaller, and so designers are closer together (for better or worse) and this allows studios to take up a smaller physical footprint (great for rent bills).

To draw people together in the studio he feels that you need a philosophy, a mission statement, something to believe in as a way to draw together the people in the studio and to explain to clients.

Spiekermann believes that the perfect form of the studio is the Rundbuero studio:

This made me think about the environment in which I work in publishing, also as a typesetter. Over the years I worked in a room crammed with eight people and too many Harry Potter books where we couldn’t alter anything because the building was listed. The small space for that number of people meant that there wasn’t enough space for the sound to disseminate so the volume of a phone call could annoy others. My next place of employment was at a much more open-plan office, with rows of desks and no separation between departments. The noise was more bearable, and you could discuss topics with other people, and all the senior management worked on the floor with us, albeit in slightly more sheltered locations. This made a big difference to me because I felt that the managing director was more available. Booths and rooms were available for meetings, with high dividers designed to block the sound. However, the atmosphere was sterile because we couldn’t alter the walls or the building.

In my current place of work, the departments are freeflowing between different open rooms that mean we can wander freely but the noise is separated between the rooms. The company owns the building, so we can be far more flexible with repairs, bookshelves and layouts. Managers have offices, but the door is open and when they are not there, we are free to conduct our own meetings in them. I was originally on another floor working with one of the main departments I work with, and then in a department reshuffle we were all moved down to the main floor, and I was put with my other main team. It’s had its upsides: I can easily chat with the editors that I need to and can hear about what they are working on, I get to know a new branch of the company. On the other hand, the noise level is such that I personally find it hard to work at times, and other people can find me more easily! The new system is better overall for the department, but that has meant that I sacrifice some peace of mind for being able to communicate easily with colleagues!

From the Communication Design: Insights from the Creative Industries, I was most interested in the Stefanie Posavec, who works in information design and data visualization. She describes it as a process of experimentation because “you don’t know where the data visualisation is going to take you.” I would like to explore data visualization in more depth later in the course because it interests me how dry, unintelligible numbers can be displayed with such grace with greater comprehension.

For my extra research this week Joe put me onto the book and documentary about walking the route of the Overground, a project devised and undertaken by the psychogeographer, Ian Sinclair.

The walk began accidentally and organically as Sinclair found that he wanted to get away from the developments in the Lower Lea Valley, a memoryscape he’s been walking around for years. He felt that it had been enclosed by the developments and that a narrative was being imposed on it.

In Dalston Junction, he explores the history of the area as a place of residence for the City’s bank clerks who could use an existing line to commute easily. The Overground has kept and extended this connection but has also led to regeneration that he feels has demolished the area’s heritage (something I can agree with). Blocks of flats went up following the 2008 crash, and the developer Barrett houses opened up its first office in Beijing with the intention of selling the majority of units off plan to Chinese buyers who may or may not visit. This is a pattern seen across the city, and country, and means that house prices and rents rise above the affordability of the local people.