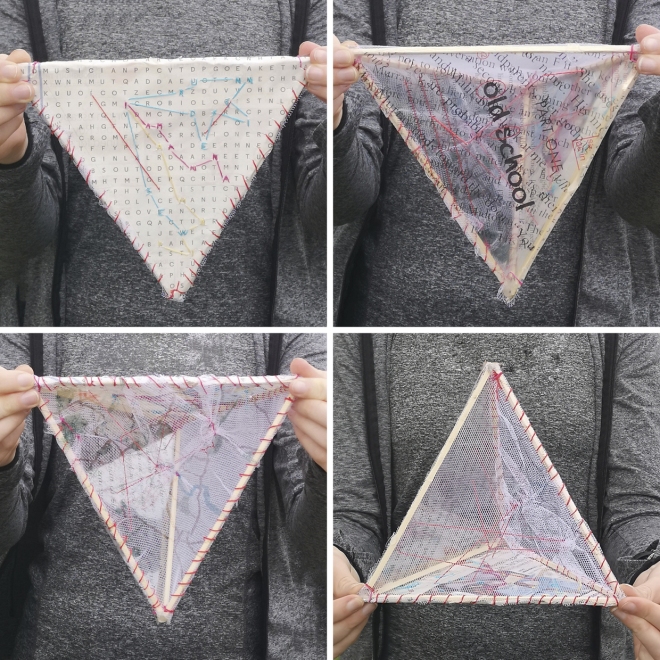 As you’ve seen, this week’s challenge is a community building exercise where you will create one piece of work – an analysis piece.

Who are you? (Name, background, influences, what makes you you?)

What is it that you do? (Showcase a pivotal project or moment in your practice)

Where are you? (geographically and does this have an impact on how you work?)

Why Design? (What does design mean to you? What does it do?)

Produce a quadriptych (four images) to illustrate your answer to each question above. Design your four images as a grid and save as one image. This is a relatively quick exercise but all final images must be considered in how they communicate and answer the questions.

To form the quadriptych, I went a little off-scope: I created a tetrahedron structure on why to display my responses to each of the four questions. I’ve presented a photo of each side in a grid, so am bringing it back to brief by doing this! I had a few rough sketches of different 4-piece grids but wasn’t happy with how one usually had dominance over the other, either by size or by virtue of positioning in the top-left corner. Tetrahedrons have four identically sized equilateral triangle faces that all connect to one another. I wanted to deliberately disrupt what I know about information hierarchy.

The structure is made from cut-down kebab sticks (thank you Asda BBQ range) and assembled with a glue gun – an adult should always live with people who own a junior hack saw and a glue gun. The kebab stick material isn’t particularly relevant to me, but I used them because I knew they would be structurally sound and I could get them easily. The size depended on the length of the kebab sticks and I wanted to construct my faces from pieces of material no bigger than A4.

I respond to texture: fabrics, nature, and running my fingers over the spot UV or embossing of a book cover, so it felt natural to me that I brought this design into real life and to explore the physicality of each material used. The tetrahedron is light and about 25cm on each side, and you can transport it easily. Given that I am in the process of moving from one rented house to another, and my room seems permanently full of packing materials, the mobility of the project chimes with or contrasts against what I’m feeling – I can’t decide which!

Who are you? (Name, background, influences, what makes you, you?)

This is a question that I feel we all think about at different points in our lives and I’ve always liked the idea that “I am what I do”. I don’t mean to pigeon-hole myself into defining my entire character by what my career or job is, but my everyday actions. What do I do on a day to day basis that shows my innermost thoughts? Creativity isn’t restricted to my nine-to-five, it’s very much part of how I approach the world and throughout my life I have expressed myself creatively: music, graphic design, sewing, (terrible) painting, screen printing.

I’ve thought previously: it’d be easier to tell me to stop breathing than to stop being creative. Melodramatic? Most certainly, but truthful. In “Visual Life”,  Michael Wolff talks about creativity being formed as three organs: the curiosity muscle, the appreciation muscle and the imagination muscle, and I think very much the same that creativity is as much physical part of myself as it is mental.

The word search comes from a happy accident because it’s an advertisement for Linkedin from the Tuesday edition of the Evening Standard. In the letters, you can see different job titles: policeman, governer, physicist, musician. I spent my bus home trying to find a term I related to. Designer? No. Sewist? No. Typesetter? No. Artworker? No. Creative? No. So, I took the opportunity to connect the letters to suit me, and to represent the weaving path I’ve taken to get here: BA English, photographer, musician, librarian, waitress, web designer, logo designer, production editor, digital production assistant, junior production controller, typesetter/artworker, student.

I reduced the amount to include to keep the letters legible, the content relevant and the paper intact. The web of threads spell out:

The colours of the threads are Cyan, Magenta and Yellow, with the white background of the paper and the black ink coming together to form the most common gamut used in printing.

What is it that you do? (Showcase a pivotal project or moment in your practice)

My nine-to-five role is as a typesetter for a children’s publishing house in London, and I wanted to showcase that connection. I love the work that I do, my freedom to manage my time and the people I work with, and spending forty hours a week on this work does make it a very important part of my life. It’s a job I didn’t expect to get, and it was fantastic when I was offered it because I realised that people wanted to pay me to create.

I work mainly on screen, and some editors send corrections to me using digital mark-up, and I wanted to bring this into the real world. I like that this book is shown in its very earlier stages of being rather than the printed, finished form that everyone can buy, and very few people have seen the file that I’m using.

Four pages are printed on acetate, similarly to the positives I use for screen printing, at different magnifications and are rotated at 0, 15, 45 and 70º, angles that I would use to create a rosette half-tone pattern for screen printing.

Where are you? (geographically and does this have an impact on how you work?)

I live in London and have done for nearly six years. Before, I travelled down to visit family and for music lessons, so my life has been fairly London-centric. I went to university in Belfast, because I always knew I would end up in London but wanted to go as far away as I could and to have different experiences before I was inevitably drawn back to London.

I am always amazed by the stark differences between different areas of London and how quickly you can travel from an area of extreme deprivation to an area of extreme wealth. Ian Sinclair (writer of “London Overground: A Day’s Walk Around the Ginger Line”) is fascinated by these contrasts between two different areas taking up different physical spaces and different temporal spaces. Thank you, Joseph, for putting me onto this work – I’m halfway through the documentary!

Running is a form of physical exercise and a form of urban exploration. It’s my way of claiming ownership however temporarily of the space and area I occupy and to see how other’s use their space. Each run is a journey and I find that I’m not quite the same person at the end as I was at the beginning. The start point and end point of each run are connected by the thoughts I have on this run, and are important to me and me alone. I like the idea of pulling a map around and distorting the land itself. I drew a simplistic map of London onto a piece of netting and sewed a line of thread along three recent running routes. I pulled and secured the thread to gather the start and end points and route together, creating a connection along the route – like a synapse from one brain cell to another, or a wormhole from one physical space to another.

Had I not been moving, and had I not packed all my screen printing equipment and pieces of material, I would have screen printed the map of London onto a piece of fabric that was more opaque. As it was, Sharpies on netting had to suffice.

Why Design? (What does design mean to you? What does it do?)

This face is hard to see, and that is the point. It’s a single piece of white netting across the face and allows the viewer to look directly into the tetrahedron: into myself. I want to express myself through graphic design – from the inside to the outside world – and to experience the world – from the outside to the inside. I want it to be a continuing work of connection between different parts of my mind and life and the outside world.

It’s all a bit messy and uneven. That’s me. You can see the knots and the glue and the edges: to create something perfect would be misrepresentative of who I am!

Here’s a few photos of my process: