Take an excerpt from a national poet or writer and translate into a new typographic form.

Ideas that I considered

One of my favourite passages of all time is this passage from The Tempest, by Shakespeare:

Our revels now are ended. These our actors,
As I foretold you, were all spirits, and
Are melted into air, into thin air:
And like the baseless fabric of this vision,
The cloud-capp’d tow’rs, the gorgeous palaces,
The solemn temples, the great globe itself,
Yea, all which it inherit, shall dissolve,
And, like this insubstantial pageant faded,
Leave not a rack behind. We are such stuff
As dreams are made on; and our little life
Is rounded with a sleep.

and it would be lovely to create a stage of type to demonstrate this, but I felt this was overly ambitious for a week-long project.

Another favourite is The Coram Boy by Jamila Gavin, which revolves around Foundling children at the Coram Hospital in London and Handel’s performance of Messiah in London in the 1750s. I wanted to set a passage on a musical stave to reflect the words, but I struggled to find a passage that would enable me to do this. This seemed a backward way of working, and I don’t want to shoe-horn a passage into a form: I want the form to be led by the passage.

My flatmate works with children and young adults on the autism spectrum, and we chat about the characteristics of the people she works with and how they react to language and the environment around them. She passed me a few books: The Reason Why I Jump, The Autistic Brain, and Extremely Loud and Incredibly Close, all of which are written either from the perspective of a person with autism. Synesthesia and sensory overload are two very common experiences of people with autism, and I thought that it would be fascinating to create a piece that would introduce a neuro-typical reader to these experiences. This passage from Extremely Loud and Incredibly Close interested me:

“Then, out of nowhere, a flock of birds flew by the window, extremely fast and incredibly close.  Maybe twenty of them.  Maybe more.  But they also seemed like just one bird, because somehow they all knew exactly what to do.”

The protagonist, Oskar, goes on a quest around New York managing his fears and phobias and so I could use the passage and his journey around a grid-based city.

Finally, I have settled on this passage from a very meta book that will allow me to play around:

The novel begins in a railway station, a locomotive huffs, steam from a piston covers the opening of the chapter, a cloud of smoke hides part of the first paragraph. In the odor of the station there is a passing whiff of station cafe odor. There is someone looking through the befogged glass, he opens the glass door of the bar, everything is misty, inside, too, as if seen by nearsighted eyes, or eyes irritated by coal dust. The pages of the book are clouded like the windows of an old train, the cloud of smoke rests of the sentences. It is a rainy evening; the man enters the bar; he unbuttons his damp overcoat; a cloud of steam enfolds him; a whistle dies away long tracks that are glistening with rain, as far as the eye can see.

Letraset has fascinated me, especially the grungy look, and the ability that it would give me to position letters however I wanted them, and control the

Things I want to try:

I’ve also booked on a one-day letterpress course at St Bride’s Foundation. In all likelihood, I will not be able to set the passage in this day, but I’ll consider the day as a building block in my skills.

My next stage was to typeset the first paragraph, which I did as the words formed sleepers under railway lines disappearing into the distance, based on an internet image I distorted. The eye follows away into the distance, but the words come from the distance into the foreground, as railway lines are two-directional. I typeset them in Jenson, an old-style serif, growing in size with leading about 110% of the point size to create a block, but adjusted so that ascenders and descenders do not cross over. As awesome as it would have been to letterpress this, I did a digital option in case I couldn’t use my own text (which I couldn’t).

The text is set on an A4 page so I can print it to size earlier, but at this point, I aim to alter the size.

I’m also using tracing paper to create misty layers with charcoal drawings and Letraset to contrast. Train timetables are precise and sharp, but the text specifically mentions steam (which I have drawn using ‘C’s) and a cafe sign and a fuzzy overall disposition.

My aim overall is to layer these pages together to create one final piece.

I’ve kept it monotone, and part of this is because this is how I am used to doing typography, and suddenly I want to splash bright colours all over the piece. However, I don’t think it fits the text quote right. Maybe a sepia tone, to embody a type of nostalgia, against a cold coloured background for the chilly outside. 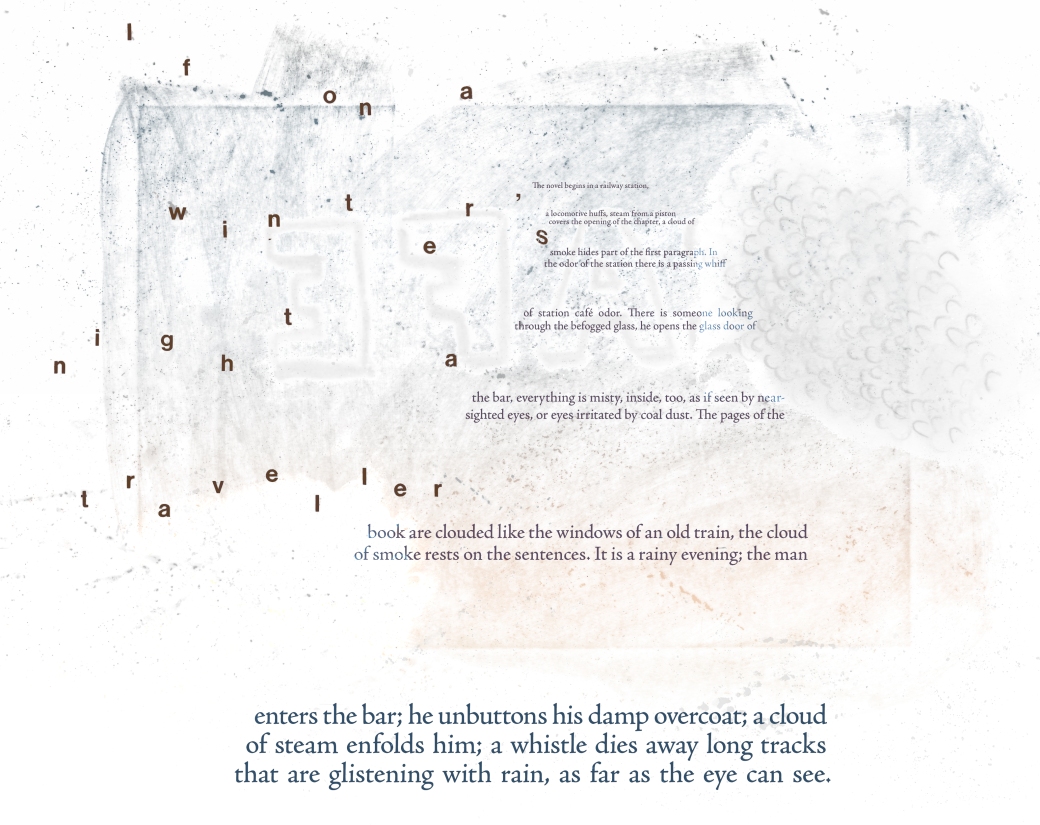