Case Study 2: Take a brand and look at how it is delivered in different countries, e.g. alcohol, tobacco, transport, cars. Is it symbolised in a different way? Why might colour or typeface have been changed? Does it work at a local level and does it work at a global level?

Guinness: Made of More

Guinness has had a long reputation of being the drink of Ireland, that that you’d never get a better pint pulled than in Dublin, however, it has a huge international consumer base and the company claims that “10 million glasses are enjoyed daily around the world” (Guinness-storehouse.com, 2019). In comparison, the Republic of Ireland has a population of 4.8 million.

The exportation of Guinness to England began in 1801, and by 1815 the company was shipping to European Countries. The ‘West India Porter’, now known as Guinness Foreign Extra Stout, shipped around the world and the market grew so large in Africa that a brewery was opened in Nairobi, Kenya, in 1963. The Guinness Foreign Extra Stout is popular in Asia, Africa and the Caribbean, and these are the territories I shall look into in this piece.

Guinness’ branding is made of three components: the logotype “Guinness”, the harp, and Arthur Guinness’s signature, and they have been used in different guises and compositions through the company’s history. Most recently, the harp has returned to its previous 3D design, and the signature given more prominence to emphasis the history, heritage and authenticity of the brand.

The first international advertising campaign featured artwork by artist John Gilroy, who illustrated the copy of “Guinness for strength”. The two most popular posters of this campaign were the Girder” (1934).

and the horse and cart with the farmer pulling the cart (1949):

Both use playful situations that comically overstate the strength that Guinness can give its consumer, without being misleading. The advertisements do not include the standard logotype branding, harp, or signature included on the product at the time, favouring the strong images and the slogan. The images can’t be compared for colour, as archiving methods might differ, however, the typeface is a powerful heavy san serif font in a bright red tone that contrasts strongly with the colours in the images and the pale background. Classically, red connotates strength and power, and so Gilroy was likely emphasising his meaning.

The people depicted in the images are engaged in manual labour: construction and farming, with a heavy bias towards traits seen to be masculine. At this time, soldiers had come back from the second world war and had found that their roles had been filled by women, and so equating Guinness with not only strength but working too could have been a very deliberate move on Guinness’ part.

In the above adverts, English language and Irish language are used, and both would have been displayed in Ireland. The Irish language poster would have been essential to capture the consumers for whom Irish conveyed a sense of nationalism. During the Troubles, Guinness considered rebranding the drink as an English drink brewed in London, but when the tensions eased, the company instead focussed on engaging an Irish market and Irish consumers around the world (The Economist, 2014).

Exports of Guinness to Africa were vital to the growth of Guinness international market, and in 1963 a brewery was opened in Nairobi, Kenya. The poster on the left was released as part of the same marketing campaign, and on the right is a UK campaign using similar imagery. 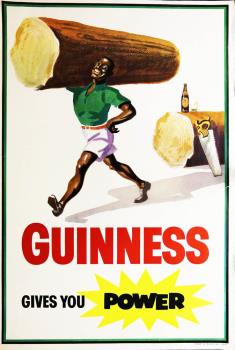 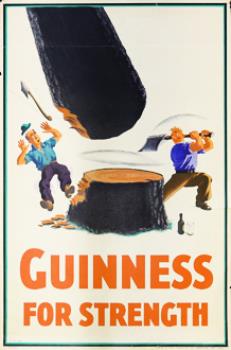 Both use the same actions of cutting trees down, although the UK poster uses Caucasian figures in a more comic way (see the figure on the left being surprised by the right man’s strength after drinking the opened bottle by stump. In comparison, the advertisement for the African market uses a similar composition to the Girder poster above and is a more obvious reference that Guinness will give the consumer strength to lift a huge log.

The slogan is different for the African-aimed poster: the word strength has been changed to power, and given a comic-book “pow” flash to infer that drinking Guinness would give you not only strength, but superpowers. The typeface for Guinness has been compacted and there is a crossbar on the G to make it more obvious, and the ‘S’s have more curve to emphasis the shape.

‘Power’ was later used by Guinness to create a black “James-Bond” persona of Michael Power, who was the epitome of the hypermasculine, strong working man. This was successful because it “played into cultural ideals of a strong African male—not unlike hypermasculine ads employed in Ireland, the U.K. and elsewhere” and also because “ower lacked ethnic affiliation, so he could appeal to everybody regardless of ethnic or tribal group” (Thompson, 2014).

The message of gaining strength and power by drinking Guinness has continued in various guises to other territories, for example, Mauritius (left) and the Caribbean (right):

where bright primary colours have been used and radically different type has been used to attract local consumers.

In more recent years, the message of strength has been used to highlight sportsperson-ship for rugby and football World Cups, celebration of black identity and coming together as a community, showing Guinness’ prowess at pinpointing where different cultures perceive power lays and using it to create a sense of “together” (adforum.com, 2019).

Medcalf, Patricia. (2016) “In Search of Identity: an Exploration of the Relationship Between Guinness’s Advertising and Ireland’s Social and Economic Evolution Between 1959 and 1969”, Irish Communication Review: Vol. 15: Iss. 1, Article 3. [Accessed 13 Aug. 2019].