By the end of this week you should be able to:

Research the outputs you generated during the Contemporary Practice module to identify four subjects that encapsulate your personal interests, identity and experiences.

Communicate and deliver a clear project brief to outline the aim, critical context, outcome and designated target audience for your self initiated project.

My housemate, Cassie, co-founded and runs Knots Arts, a not-for-profit for young people with autism, whose aim is to “create inclusive, friendly and fun sessions were children and young people feel safe and supported to develop their communication skills and build friendships. By meeting others who understand the challenges that social communication difficulties can bring, children are able to work together to embrace their differences and overcome any obstacles that they may present.” Knots runs youth clubs, drama sessions and holiday programmes for these young people, and my intention is to go along to their Saturday Youth Group that caters for 13 to 25-year-olds.

There is a rising awareness that the model for diagnosing autism is very centred around how autism presents itself in males. Females, on the other hand, are less likely to be diagnosed because they tend to be able to “socially camouflage” and disguise social insecurities to a greater extent than males with autism. Initially, I wanted to explore how females diagnosed with autism viewed the world and how they feel they respond to social situations, not verbally, but with non-verbal cues and body language, which some people with autism can have difficulty interpreting. How do they feel they echo people around them in order to ‘camouflage’?

After talking to Cassie, however, my view has changed as people with autism don’t always see genders and the separations between them. Gender is now widely accepted as a social construct, and for people who don’t understand or engage with social systems, such as people with autism, the labels are, at best, irrelevant. Additionally, a large number of people with autism identify as transgender, or non-binary. It, therefore, seems illogical to impose gender as a boundary of this project.

As an alternative, I will look into how people with autism as a whole and how they communicate with each other and with wider society, with a focus on non-verbal cues. Work, such as It’s Raining Cats and Dogs by Michael Barton, has already been published on the difficulties of understanding idioms and figurative language as a person with autism. How do the people in the youth club view non-verbal cues, and what do they wish others would verbalise in order to signpost the conversation?

Cassie also mentioned that graphic symbols can be confusing for people with autism. They may have learnt that these signs denote male and female toilets, for example: 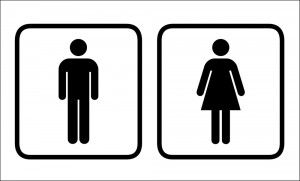 This, however, might be confusing, because it references (stereotypical) social ideas about how binary genders differ: The final outcome will be informed by my first session at Youth Club. I hope that I will be able to expand it into Brief 2 by talking to the people at Youth Club about how museum exhibitions can be more inclusive and accessible for them, including layout and wayfinding.

I would like to play with: layers, obscuring, warped fonts, riso printing, metal type

Around 1 in 100 people in the UK, around 700,000 people, are estimated to be on the autistic spectrum (Brugha), and the condition has been coming to public sphere more and more over recent years: from the scare-mongering that vaccinations cause autism to the determination of climate change activist Greta Thunberg, who is “proud to be on the spectrum“.

Autism can present itself in many ways that science has also been playing catch-up, as previously it was believed that boys were more likely to have autism. It is now thought that the threshold for diagnosis is weighted towards males because females are more likely to socially mimic others with the result of camouflaging (albeit unknowingly) their symptoms.

At the point of writing, I haven’t set the final outcome because I’d like it to be formed by the people that I meet through the project.

People with autism view the world through a different lens than those without it, and communication can be confusing as people are navigating systems of which they are not intuitively aware. Forms of communication, such as non-verbal cues and way-finding, rely on the people involved having a shared understanding of gestures, figures of speech and symbols. This project will focus on the differences in how people with autism react to different forms of communication compared to neuro-typical people and between themselves. Part of this will involve my own impressions, and then I would like to give the young people a chance to contribute about how they feel when faced with confusing communication and how communication can be altered to make it more clear to them.

My primary audience will be the young people and their peers, to show their own voice in the world. On a wider scale, I would like my project to educate young neuro-typical people working and socialising with people with autism about the difficulties that people with autism can face with communication and how small adjustments can make people more comfortable.

Phases will be broken down into weeks to match course schedule.

Week 1 – Project will be outlined and the background explored. Connection will be made with the youth group and research done into current depictions of autism.

Week 2 – I will visit the youth group on Saturday and talk to the young people there. I will involve myself with the activities and get to know the people: what are their interests, who are their friends? I will lead onto questions, what social cues do you find confusing; how do you find ways in order to socially integrate, how does your view on gender affect this? Ideas will be pulled together and a final outcome formed.

Week 3 –  Youth Group visit, for the second time. At this point I will have a definitive framework through which to generate content.

Week 4 – Youth Group visit, for the third time, where I will ask for feedback. Presentation and hand-in at the end of week 4.

The information entrusted to me will be kept confidential according to Knots Arts’ safe-guarding policy, and as I will not have time procure a DBS check, I will be accompanied by a Knots Arts staff member at all times.