Who is this project for?

This project is aimed at helping the design community and hiring departments to build and structure application forms in a way that would allow neurodiverse people to access the next stages of the application process.

With the Youth Club of Knots’ Arts, I will conduct a short focus group in order to obtain research about what would help neurodiverse people fill in application forms. To do this, I will provide samples of application forms and ask the group what they like and dislike the forms, and how they feel they could be improved.

The research will be collected physically by way of notes on the application forms written by members of the group, and orally by myself and the leaders listening to their thoughts and concerns.

The forms will be paper forms sourced online. Many shops do have online forms, but for the practicality of the session and availability of technology, they will be printed forms.

The project’s aim is to reduce stress around application forms for neurodiverse people, so it is possible that this study will cause stress for participants

I had expectations for the outcomes and noted them down so that I would be aware of my bias. They were:

The main concerns from the youth group came from data protection and how their information was going to be used. I assured them that applications are generally covered under privacy protection laws, however, this clearly still worried them, in particular, one participant who brought it up multiple times.

The application forms were generally deemed too long and to ask too much information, with a particular reference to Dollar General. The Forever21 form was the most-liked form for the information asked as it was brief and the questions related to the information the group expected to be answered.

Although the forms were intended for part-time work, the group were concerned that they were asked for details of previous employment because many had never had jobs before.

The background of the Forever21 form, and that of Dollar General, were thought to be distracting and unnecessary.

As I said above, the forms requesting less information, such as Forever21, were favoured partly because of the lesser deceive of perceived intrusion and also because the pages were less cluttered. The typeface was larger and there was more white space around the text.

Where the forms asked for longer answers to questions, dotted lines were preferred as a guide for how much to write. It would be made even clearer if there were boxes around each question, further separating each question visually for the applicant.

On the Topshop form, the boxes to the right of the answers seem to relate to an internal process, but this was unclear to the youth group. Because no instructions were given to the applicant about what to do with these boxes, they were confusing.

Some forms asked for the applicant when they would be available to work. Although I had one hypothesis that tick boxes may mean neurodiverse people might have an issue with tick boxes, it was much preferred to the Toys’R’Us version. TopShop had a similar idea with a table, however, confusingly split the day between morning, afternoon and evening. I can imagine this would be confusing as the times are not specified.

The Comic Sans used for the Toys ‘R’ Us form was reviled as childish and as if the form was “made to look easy-to-read, and the Forever21 was considered unnecessarily fussy. All other typefaces were accepted.

There was a consensus that the typeface was less important than the size and leading of the font. Larger fonts with plenty of leading to create white space around the text was most important because it seemed less intimidating than a small, closely packed font.

The forms had minimal colour: most used black ink on a white background, presumably to reduce the cost of printing out each form. Topshop used colour for headings, which graphically indicated a change of section, however had an entirely black first page, which to me is a diabolical waste of ink.

A detail that seemed to concern the youth group was the distinction between “present address”, “current address” and “home address”. To them, it seemed unnecessary and confusing when “address” could have been used instead.

Questions such as “Why do you want to work for Argos/Topshop” was met with answers of “because I want to earn money”/”I want to have a job”. What would be a better way to pose this question so that the applicant would know what was asked of them? Questions such as “When have you delivered/received great service? What did you do/receive? How did you measure it?” (Topshop form) caused confusion and stress because the questions were grouped together: When, What, How. Participants would have preferred them to be separated, with a space for an answer between them.

In addition to the job application forms, I also asked the focus group to consider the Knots’ Arts Enlighten form. This is filled out by the parent or guardian of the person coming to one of their programmes and allows the person’s needs, likes and dislikes to be communicated to the leaders. If a neurodiverse person becomes distressed or is non-verbal, they might not be able to communicate their needs to a leader, and the form means that the leaders are aware of triggers and stress factors.

The leaders would like the form to be redesigned so that it is more accessible for the young people to fill out themselves, rather than their parent or guardian and have asked me to help as part of the project. This form was considered after the job application forms. The outcomes were:

One young person comes to the youth club with their mother as they are mostly non-verbal. The mother explained that as a parent, she often had to fill out forms detailing her child’s ASC, and felt that it could be very upsetting when it focussed on her child’s triggers or behaviour that indicated that they were stressed. Instead, she thought that a focus on the positive attributes of the young person could be also highlighted in the form. Also, she felt that the form asked questions in the form of words, where perhaps symbols or illustration could be alongside the words so that people who found it more difficult to read could understand what was being asked. This could turn a form-filling task into an activity young person and parent/guardian could complete together so the young person has more agency over their care.

The most salient point that I drew from the focus group was that clear sign-posting is needed. Why is information needed? Where do I need to answer that question? This could be tackled in a number of graphical ways, including boxes and colour-coding.

Another conclusion to draw from the focus group that less information was needed: on both sides. Some questions were seen as intrusive and unnecessary by applicants, and if there were large blocks of text, it was confusing and the information was not taken in. Recruiters need to consider what information is actually needed at application stage, such a contact details, and what is only of interest to them, for example, “Where did you find out about this role?”

I am going to build the form in Indesign, as this is the project I am most familiar with! For the typeface, I looked at Google Fonts and shortlisted these three:

before settling on IBM Plex Sans because I feel it is open and spacious, with clear tails on the ‘l’s.

I also want to make sure that the information asked was relevant so cut out much of the questions asked, whilst keeping in essential information. Here is draft one of the form: 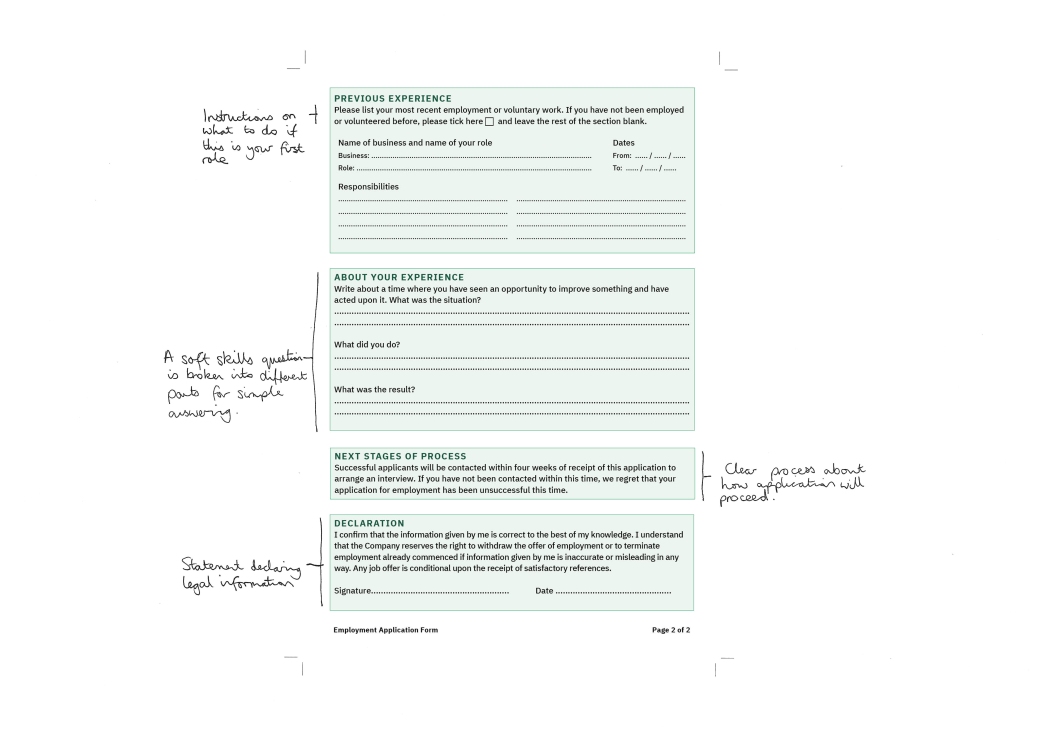